3D imaging has made a bit of a splash in recent years through high definition cinema such as the IMAX system and through the development of 3D TV. It may surprise you to learn that this is by no means a new phenomena and whilst recent technological innovations have improved the convenience and quality of the experience, 3D photography was in fact first popularised by the victorians.

3D, or more accurately the impression of 3D, relies on the simulation of binocular vision. The camera, ordinarily, is a monocular device, that is it sees the world from a singular viewpoint, through a single lens. We are fortunate however in that we enjoy (assuming no visual impairment) binocular vision, we see with two eyes, each with a slightly different viewpoint. This small but significant displacement is what allows us to judge distance and see the world in three dimensions. To recreate an impression of this three dimensional vision using a two dimensional technology like photography requires us to make two images from slightly different viewpoints, then combine them to fool ourselves that we are looking at a 3D image. There are a number of techniques that you might employ in order to achieve a 3D effect. In this series of articles I have described three distinct methods.

It was not long after the introduction of photography in the mid C19th that the first method of simulating 3D was devised, namely the ‘stereograph’. This involved making two images either by using two cameras placed side by side, or by using a dedicated stereoscopic camera, fitted with two lenses. The resultant prints were made to a specified size and viewed together through a dedicated stereoscopic viewer, allowing the image taken with the left hand lens to be viewed with the left eye only, and the right hand image with the right eye only, thus reproducing the effect of binocular vision. The stereograph has remained popular and there have been many designs of stereoscopic cameras throughout the 20th century, such as the Iso Duplex, the Wray Stereo Graphic and the Stereo Realist. Perhaps the most popular incarnation of the stereoscope was the ubiquitous ‘View-Master’, a stalwart of ever 60s childs’ toy box. But far from being just a toy, the View-Master range also included cameras and projectors. Today there are a number of stereo cameras available including models form Holga, using both 35mm and 120 film, and even some stereoscopic ‘pinhole cameras’ such as the Resesky 3D Pinhole DIY camera.

The second method of creating a 3D image is the ‘anaglyph’. This is the one that requires the viewer to wear special ‘3D’ glasses. The idea for this technology dates back at least as far as the early C20th and the first publicly released 3D movie was screened in 1920; but is was in the 50s that 3D cinema really entered the mainstream. 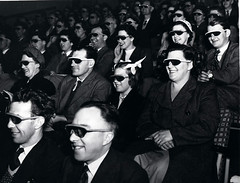 With the anaglyph the separation between left and right eye vision is achieved through filtration, the simplest version featuring different coloured lenses (either red/cyan, or blue/yellow). More sophisticated systems such as contemporary 3D cinema use polarising filters, with each eye having a polariser set at right angles to the other. I feel I should mention at this point that whist those (not always) free glasses that the cinema provides are in fact polaroids, they are not sunglasses! Do not use them as such, you could seriously impair your vision!

The big advantage of the anaglyph is that it is not size specific. The stereograph requires the images to be made/displayed to a specific size and viewed at a specific distance, ideally with a dedicated viewing device. The anaglyph can be projected or printed to any size. It is also the case the the anaglyph can be seen by many people simultaneously, whilst the stereograph can only be viewed by one individual at a time. The anaglyph then perhaps lends itself to the digital environment more readily than the stereograph*, assuming that your audience has the required 3D glasses. There is third option available to us and whilst not the most effective 3D realisation, and only available on screen, it does have the advantage of not requiring any additional viewing device. I refer here to what has become known as the ‘wobble gif’.

The following articles present tutorials for each of the afore mentioned 3D imaging techniques. To complete these you will need ideally access to Adobe Photoshop**, although not necessarily the very latest version. However, before you can proceed, you will first need to create some suitable source images…

* It is possible to view a stereograph on screen, without a viewing device. The theory is that you display your two images side by side on your screen, then move in close and stare at them whilst purposely crossing your eyes, a bit like looking at those ‘magic eye’ pictures. This can/does work but in my experience it is difficult and I am not altogether sure that it is good for you – it certainly gave me a bit of a headache when I tried it. I therefore cannot with a clear conscience endorse this technique. I suggest that you discount it.
** Any version full version of Photoshop from the original ‘CS’ onwards will suffice, but I fear that Photoshop Elements is not up to the task.