This week sees the VE Day 75th anniversary and celebrations are planned to mark the end of fighting in Europe (the war continued in the Pacific for another 3 months). This has led me to look again about a project that undertook 20 years ago, exhibited to mark the millennium, or to be more precise the end of the C20th.

During WW2 my father was an air gunner in the RAF. Growing up this was  something that I was acutely aware of and although throughout his life he was obsessed with aviation, his wartime experiences were something about which he rarely if ever talked about. I always found it difficult to equate the mild mannered, easy going ‘anything for a quiet life’ gent who I new as Dad with the idea of him as a young man strapped into a turret at the back of a Lancaster. It seemed completely incongruous.

Thinking on this I tried to imagine what it might have been like for him. I have studied history and I have an extensive knowledge of the events of 1939-45, but there is a world of difference between knowledge and experience. I could study all I liked, become an ‘expert’ in the field, but I could never truly ‘know’ what it was to have been there. At this time (1999) I became increasingly aware of that there was an entire generation who shared a kind of collective consciousness, a consciousness born of individual, personal experiences with a shared understanding. I found myself drawn to photograph and interview these people, developing the series into what became the ‘I Witness’ project.

As things progressed I set a number of parameters to help define and focus the project. I quickly decided that I would not to go through an organisation such as The British Legion to find sitters. I felt it was important that those featured were ‘ordinary, people you might come across in an everyday context; it should be the stories that were extraordinary, not the subjects. This preoccupation with the ordinary also drove the portraits themselves and I tried to represent the subject in a (then) contemporary setting, to show them in a familiar context. This would then contrast with the text, the recollections.

I also decided that the texts should be transcribed verbatim, albeit abridged. Even if this raised doubts as to the historical accuracy. The project was not about the war, it was about memory and experience.

As things progressed I developed a method. First I would contact the subject and arrange to meet. I would then interview them before photographing,  recording the conversation using a dictaphone. It was important to conduct the interview first as ideas for the portrait would be suggested by the content of the conversation. I would then photograph the subject in a context which had some reference to or resonance with the experiences that were recalled. Sometimes this was immediately after the interview, sometimes on another occasion.

This work was exhibited was first exhibited at Havant Arts (now The Spring) in December 1999 and into January 2000. It then moved on to Aldershot in 2000 and finally Manchester 1n 2021. Over this period the project was extended to include more subjects and giving the project more breadth and enabling me to take on a larger gallery space.  At each venue each portrait was accompanied by a printed transcript taken directly from the interview recordings, and I also collected original artefacts and ephemera and added a sound installation. 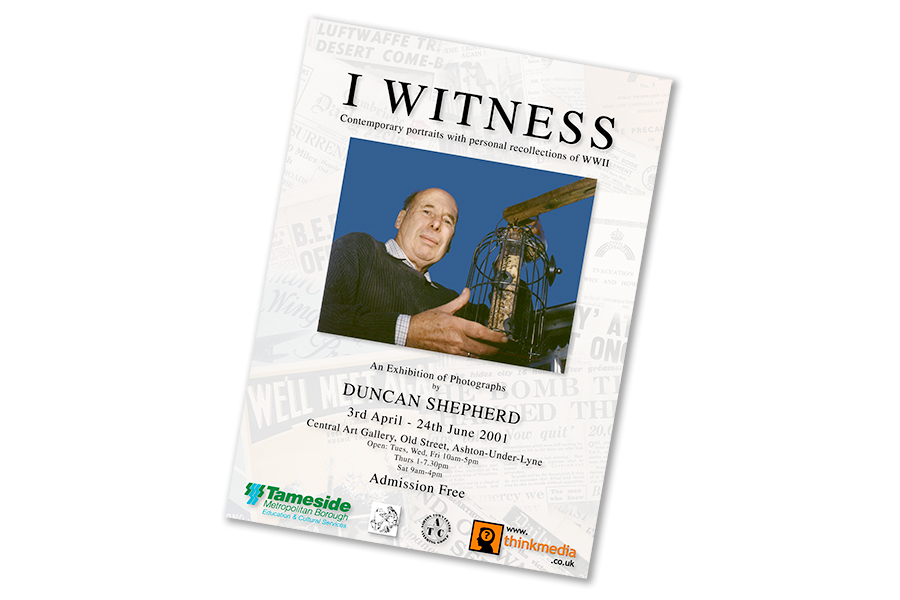 I Witness and VE Day

The last time these images were presented to the public was 2005 when they were displayed on a large screen in the Guildhall Square, Portsmouth, as part of the 60th VE Day celebrations. 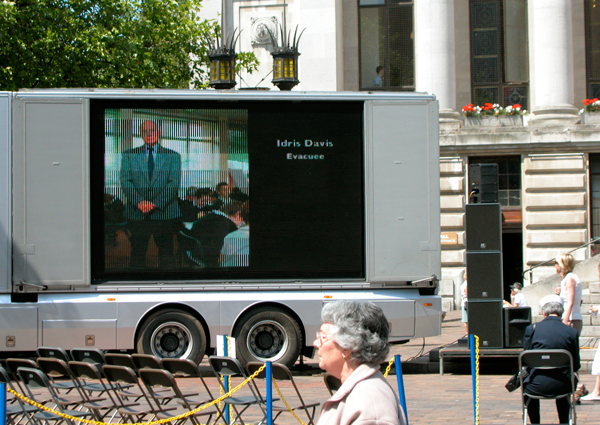 Since then, the project has been available online as a dedicated website which you can view here

It’s few years since I looked at these images and I have not updated the web gallery in quite a while. Perhaps now, as we approach the 75th anniversary of VE day, it is time to reappraise. I plan to rework the website and incorporate some of the images into this site, perhaps as part of an archive portfolio.

It is of course a sad but inevitable fact that a great many of those who featured in this project are no longer with us, my father included. I am thankful for their participation and I feel privileged to have known them.